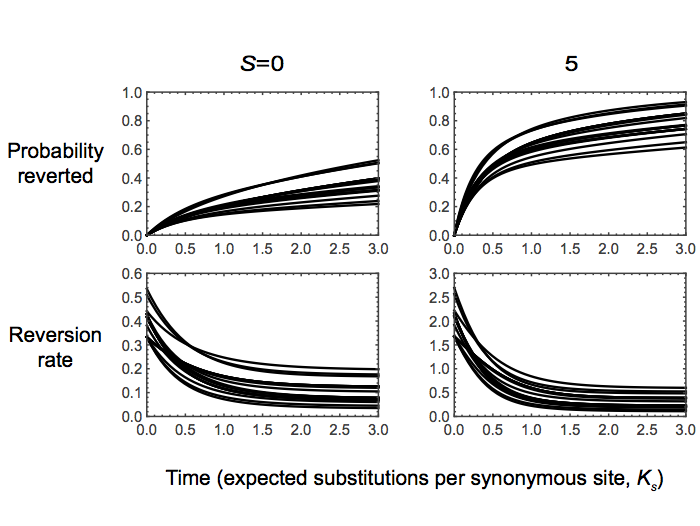 Epistasis and the dynamics of reversion in molecular evolution.
McCandlish DM, Shah P, and Plotkin JB.

Recent studies of protein evolution contend that the longer an amino acid substitution is present at a site, the less likely it is to revert to the amino acid previously occupying that site. Here we study this phenomenon of decreasing reversion rates rigorously, and in a much more general context. We show that, under weak mutation and for arbitrary fitness landscapes, reversion rates decrease with time for any site that is involved in at least one epistatic interaction. Specifically, we prove that, at stationarity, the hazard function of the distribution of waiting times until reversion is strictly decreasing for any such site. Thus, in the presence of epistasis, the longer a particular character has been absent from a site, the less likely the site will revert to its prior state. We also explore several examples of this general result, which share a common pattern whereby the probability of having reverted increases rapidly at short times to some substantial value before becoming almost flat after a few substitutions at other sites. This pattern indicates a characteristic tendency for reversion to occur either almost immediately after the initial substitution or only after a very long time.